There is a picture that has moved from basement to garage and back again, and from rowhome to rowhome in Philadelphia.  It is a picture of a family, joined together in the family bakery in the late 1910’s.  I first saw this picture as a child and it was thought to be lost for the years since.  I’ve managed to scan it and take in the details amongst the water stains and torn paper.  My great-great-grandmother is in the picture.  It was taken in her sister and brother-in-law, Elizabeth and Michael’s bakery.  My great-grandma is there too, as a little girl.  More than just a photo, I recently learned it was a Baptism celebration for Elizabeth and Michael’s son, Nicholas. 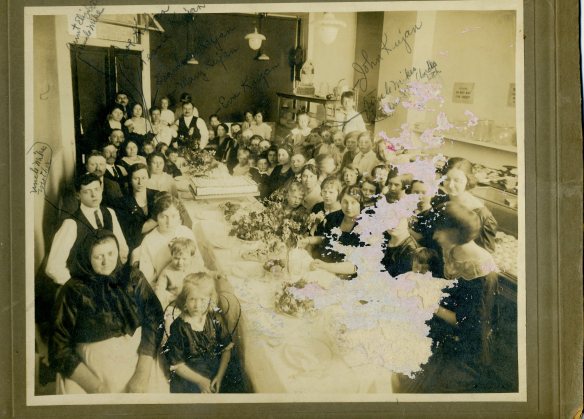 I never met these bakery owners.  But I know they are the reason my great-great-grandparents chose Philadelphia when leaving Europe.  They made a home there and found employment doing odd jobs in the bakery.

More than finding dates and places of birth, I spend much of my time doing ancestry research, trying to put together a puzzle in my mind, trying to piece together what this person was like.  What kind of struggles did they go through?  What did they look like?  I was able to recently find a picture of Elizabeth and Michael recently, along with some records and pieces that give me an idea of who they were.  They came from Hungary, single, young and poor.  Michael was tall with dark hair and “deep blue” eyes.  He labelled himself a self-employed baker when he stepped on the shore of New York, at the age of 19.  He came from Hungary but spoke German.  Had several children, became a Naturalized citizen right off the ship, battled pneumonia in 1918 and had the highest appraised house on his block by the time he was 40.  By this time he filled out his draft card for World War II, he was gray, but still slender and still baking.  He spent the last sixteen years a widower.  He lived to 93, the year before I was born.  It makes the connection feel closer in the frame of time but there was a world of difference between our lives.  When I look at the picture of he and his wife though, I can’t help but feel like they are characters.  I like to think she was sassy.  I like to give them a story.  In a way, I wouldn’t be here today without them, distant relative or not.

I’ve written about my ancestry research before.  It’s something I love and hate, because it’s thrilling to find a piece of the puzzle and incredibly frustrating to find either nothing or to confirm your initial theories were false.

I found a crucial piece to our family puzzle last night.  I confirmed all the vitals of my Great Grandfather; a man I never met, my father never knew and his father barely knew.  His World War I draft card says he was 5’7 with red hair and green eyes.  He immigrated by himself at the age of sixteen from Ireland.  His ship ran ashore leaving Liverpool before coasting onto Philadelphia.  He was a steelworker and laborer.  He married an Irish girl here and housed her widowed father and two younger brothers; all of them laborers.  They lost a baby girl as an infant and died fairly young themselves.  The census says he could read and write, but the signature on his Naturalization paperwork leads me to believe he was not accustomed to holding a pen of any kind.

He left his family behind at the age of thirteen, to make a living in England as a coal miner.  After three years in the soot, he left for America.  I haven’t a clue what became of the rest of his family.  I’m having difficulty with his parents’ names and the time span of Irish records I need were either lost in a warehouse fire in 1922 in Dublin or destroyed by the Irish Free State purposely.

While in Ireland for our honeymoon, and I met with a county genealogist who gave me records from my family.  It seemed too easy.  I don’t want to say they tried to fool me, but I was fooled.  I have records for someone of the same name, in the same town but it doesn’t add up.  I’ve done this long enough to know that back then, records and dates were not consistent and often disregarded, but I’m dying to figure out the answers.  As a researcher and history buff by nature, I can’t feel settled until I can go further.  I don’t want to go harass any distant relatives; on the contrary, I’ve had Irishmen contact me in regards to possible connections.

There is simply something to be said about learning where you come from and feeling that you share some sort of trait or identity with those who came before us.  I was the only one in my family with hair that glows red and though my eyes are often hazel, they shine green regularly.  I’d like to think somewhere along the way, it’s trickled down to me alongside my fondness for Ireland.  Maybe that is a bit too romantic, but whenever my husband comments on how red my hair looks a particular day, I can’t help but admit that I’ve been dreaming of the Galway Bay.

Studying ancestry is one of the things I’m truly passionate about.  I spent the day yesterday at an Ancestry Day workshop in Philadelphia, sponsored by the Historical Society of Pennsylvania and Ancestry.com.

Yeah, I know, I’m a dork.  I spent the day with hundreds, actually, I’d say at least over a thousand old people.  I mean ancestry enthusiasts.  And I say they were old, only to add to my point that I’m an old soul, because honestly, I got along with them swimmingly.  We laughed, we joked and discussed how young people just don’t get it.  They must see me as old too; I’m only 28 mind you.  It was a swell day.

(“Swell” by the way, is a fine word to use but apparently even though I’ve tried to revive its popularity, even Microsoft Word is unsure of how I’m using it.  I’m not letting them stop me or change it to “swelling”.  That just doesn’t make sense.)

The main point of this post however, is that I’ve realized the inconsistency of my ancestors and maybe that’s why I’ve lived such with such colorful stories so far myself.  When I look around though, I have friends who have done the same thing, gone to the same church, same school, same, same, same as their parents and their parents before.  I don’t mock this, because I honestly admire tradition and all it represents.  Instead, I come from people who never really seemed to know who they were or what they wanted.  Even if they did, what they relayed the family about themselves was untrue anyway.  Despite that, I’ve found so many pieces to our family’s ancestral puzzle, but they were not the type to play along and do as you’re supposed to.

The numerous speakers gave ideas on how to further genealogical research; where to search and what kind of odd records could be of assistance.  I realized how neither side of my family had ever consistently practiced religion, stayed in the same place and joined organizations for any extended period of time.   They really didn’t leave a paper trail of any kind unless it was required for the government every ten years in a census.  Even then, like most families, the data is screwy.  The most consistent thing about my family, as found through records, is that they were inconsistent.  I realize the times were different long ago, but for research sake, sometimes I do admire the people who had boring families.  But then again, when I find a truly fascinating puzzle piece, man am I glad the people in my past were interesting.  I wonder if they were inconsistent out of choice or out of circumstance.  Still, I hope one day I leave generations sifting through my records saying, “Wow, that Shannon was a swell character”.