Boy am I behind.

I spent the last two days pursuing a dream of mine, at least pursuing a possibility; that I could turn years of dreaming into a paying career opportunity.  So I have neglected my posting for a couple days. I have no idea what the future holds, but I do know that I’m looking for inspiration from every possible crevice in my life at the moment. And hope. 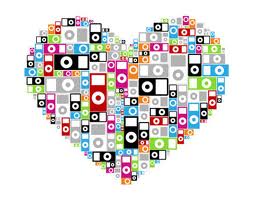 After working on the computer through the night, I took a shower alongside my trusty iPod speaker:

I realize my iPod is full of the music I handpicked, so I am likely to find things I like most of the time. I should be able to say “all the time”, but I have those random albums that I have on my iTunes that I don’t necessarily enjoy, I simply feel as though I should have them. Who am I trying to impress anyway? Will a Rolling Stone editor review my playlists one day and judge me for not having all of Bob Dylan’s albums?  No, and I only truly enjoy a handful of his songs, so I should just uncheck the rest of them, sync and move on.

Getting back on track, I took my shower and put the iPod on shuffle.  Songs jog all sorts of thought and I had hoped to find something to give my tired mind some mental peace.  What I found was countless songs that seemed to speak to my hopefulness.  It seemed every song was speaking to me about making a change or finding solace in knowing things were on an upswing.  I’m certainly not down in the dumps, but I’m at a point where things need to change and I need to utilize my talents.  It’s terrible to feel like life is being wasted, when I know I have so much more to offer and give.

I was kind of stunned that my Ipod was reading my mood.  I realize there are genius settings that select certain types of music and playlists, but it hasn’t been the first time that I found the sounds I needed without scrolling through.  Maybe I’m crazy.  Maybe I’m reading too deeply into one of my best friends, a hunk of metal that is the size of a deck of cards.  It doesn’t even remember my birthday, but it does supply me with hours of happiness.

And don’t worry; it’s really not my best friend.  But we are inseparable.

Shannon enjoying music early on, before walking. Most likely listening to Mom's Elton John. (Disregard the hand, it's an unintentional gesture)

Music is crucial to one’s existence for many people. I am one of those people.

From an early age, it impacted my life. I remember waking up, pre-Kindergarten years and pulling out my Mom’s vinyl, trying to figure out how to play them before she woke up. I’m happy to say I never did any damage and I also inherited the collection when I moved out on my own.  What a great collection.  I attribute my passion for music from her.

As time went on, my allowance of $1 per week went toward cassettes.  The purchase was always a huge decision because it took a good deal of time to save the money, and I treated each one like an investment. More than one song had to be appreciated to buy a whole cassette; otherwise it would get taped off the radio.

By the time Santa got me a CD player, I found CD’s pretty expensive for my habit. My first CD was given to me by my Mom after I had some painful dental work. My gauze-filled mouth was all smiles when I had the joy of painstakingly opening my first CD, even with all those unnecessary and impossible sealing stickers. At one point I considered only purchasing CD’s from the labels who gave the convenience of those little pull tabs on the plastic wrap to get the CD open a good two minutes faster.

Eventually in high school, the money I made at my first job at a Hallmark store went almost exclusively to music.  Maybe a little went to gasoline to get to shows.  The towers of CD cases I accumulated were staggering and alarming to my Dad, who at one point asked how I afforded them.  He didn’t want to ask if I was stealing but looking back, I can see how he might have thought it to be impossible to make $5.25 per hour for a few hours a week and create such a collection.  I can tell you in all honesty though, each was legitimately purchased.

Today, my iPod is now full, of music ranging from the 1930’s to today, in any genre you can think of. Music impacts our lives and can help define moments, which is probably why I seem to have generated a playlist for so many routines and events.  So many of us recollect moments in conjunction with a song, immediately allowing us to recall events and slip into old emotion, even years later when an old song is played.  Though it’s probably morbid, I even know what songs I’d play at my funeral and my husband has strict instructions to do so. We must be a good match because he agreed he had some defining songs he’d already chosen post-mortem for himself.  My playlist is called “After”.

Alongside writing, for a short time I studied sound engineering and my Professors agreed that I had a knack for it.  Instead of following my heart, I decided to divert to more logical courses of study while feeding my need for sound on growing piles of debt, of which only ticket stubs and memories remain the acquisition.  These are the best investment I ever made.  The culture and experiences that music provides is overwhelming and never ending.  Today, surviving on the basis of music seems to be becoming more difficult and unfortunate.  For the rest of us, we can peruse our way through our daily lives with little devices that fill our heads and ultimately our souls with escape and inspiration.