I took the weekend off from writing because, quite frankly, I wanted to.  I haven’t had a great following of late anyway so I don’t think it was missed.  So instead of sitting in front of the computer, I lived amongst the physical people; except when I read the posts that were emailed to me.Friday night was the much anticipated Red Hot Chili Pepper show in Philadelphia.  Since we got our tickets in January, it felt like it would never get here, but luckily time chugs along and we found ourselves with thousands of people who had made the trek to South Philly for the sold out show.

It was a good show.  I’ve seen them over thirty times for sure, but I stopped counting then.  Not too sure why.  Counting would have been easier than explaining that at one time I knew there were thirty but now there are more.  Regardless, this was the first live show I’ve seen with newest guitarist Josh Klinghoffer.  He is a lot like John Frusciante, except he doesn’t seem to despise fame and fans.  Josh dresses the same, seems physically affected by the music and goes a little off the deep end with making noise with pedals like John.  It’s no wonder that they toured and recorded together prior to swapping the lead guitar job with the Chilis. 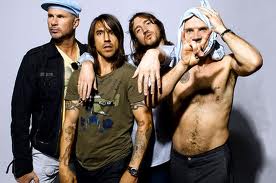 I love John Frusciante because he is a guitar prodigy for one; he’s creative and innovative.  He’s been the backbone to music that has been the soundtrack to my life thus far.  I also feel offended that he threw that away; twice.  He did this to us before in 1992.  As a dedicated fan, I also find myself insulted that he didn’t bother to show at the Rock n’ Roll Hall of Fame ceremony when the band was inducted last month.  I know people grow and change, but to completely disregard what elevated one’s success just doesn’t feel right.  Since in my mind I’m only an honorary member of the band, I realize that I shouldn’t truly pass judgment but quite honestly, I feel slighted that he’s abandoned us.  He can sit in his house in Malibu and complain about having money, a creative career and a following because of the established band who took a chance on him (twice) alongside their fans; otherwise he’d be just like every other musician who wanted to make it in LA.

So on with the show.  It was probably one of their more elaborate productions, with a video floor, rotating screens and probably a million LEDs.  I have to say I didn’t feel a connection though.  I’m not a Chili Pepper snob, but I appreciate their music from the beginning to current.  I won’t be one of those people who says “the new stuff stinks, the old stuff was awesome” because I don’t need to prove to anyone what kind of fan I am.  I enjoy both and they are both very different.  Unfortunately the old stuff doesn’t sell out seats; the new stuff does, so that’s what we get.  And I accept that.  However, I felt like the set list was made so that the parents who brought their middle school kids would feel included.  It was so top 40 that I should have just listed to a greatest hits compilation.  I just wanted more.

They sounded good.  The highlights included Flea’s high energy bass and crowd interaction, as well as Chad Smith (no he’s not Will Ferrell) rockin’ the drum kit.  He never fails to disappoint.  Anthony Kiedis seemed disconnected and maybe that’s because we were the last show for this leg of the tour.  After us, they get to pack up and head home for a couple weeks. 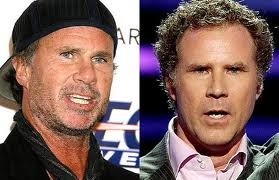 Chad Smith vs. Will Ferrell

I won’t say I’m disappointed, I just didn’t feel the magic that I’ve felt so many times.  That’s the reason that I kept coming back.  The band is usually like a drug, ironic with their history.  Once I get a taste, I have to get more and soon.  This time, I didn’t feel the urge.  I felt that I did my duty to see them, but I’m not going to start booking plane tickets to other cities to get a fix, like I usually do.  I feel really sad about it, to be honest.  I don’t think it’s because I’m any older either, I think it was just a lackluster show for me.

I will catch another show this tour, somewhere, maybe combine the trek with a trip to visit family.  They always see through me during these trips and know the real reason I’m there, but this time I won’t set my standards too high and I’ll hope I catch the spine tingling effects of the Peppers.